A Bad Try Better Than None

“It is not the critic who counts; not the man who points out how the strong man stumbles, or where the doer of deeds could have done them better. The credit belongs to the man who is actually in the arena, whose face is marred by dust and sweat and blood; who strives valiantly; who errs…who at the best knows in the end the triumph of high achievement, and who at the worst, if he fails, at least fails while daring greatly, so that his place shall never be with those cold and timid souls who neither know victory nor defeat.”

I’m sure you’ve probably heard this quote before, whether in bible studies, motivational talks, or from a friend. I don’t know about you, but I struggle acting like I really believe a bad try is better than none. I have strong perfectionistic tendencies that often cause me to act as though doing nothing is better than doing something poorly. If you’re a perfectionist that thinks you’re better off with your perfectionism than without it or if you need a reminder not to just believe this quote but to act on it, then this post is for you.

So, why is a bad try better than none at all?

We dread failing and cringe at our own efforts, comparing them to those of friends or even professionals. For example, though I think my writing is decent, it’s a little frustrating to know it’s not near the quality of a best-selling author. But where do you think those best-sellers started out? How do you think the efforts of professionals looked when they first started out?

Answer: Evert bit as pitiful as your own.

Though some people may believe in prodigies and unfair genetic miracles, everyone starts at the beginning of the racetrack, whether you’re Stephen King or Tiger Woods (If you don’t believe me, pick up a copy of The Talent Code). 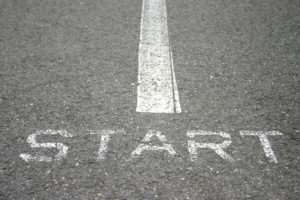 “Anything worth doing is worthy doing badly.”

During writer’s conferences, I make it my goal to think of the best question possible and to be the first during Q&A time to ask it. Sometimes my questions are great, and I’ll even get compliments for them. Other times, I feel like my questions are idiotic and only a naïve fool would dare to ask them. But I still make a point to ask a question, even it’s not the perfect one.

The same goes for my blog posts. After over a year of blogging, you’d think I’d be churning out posts without any insecurities swamping me. And you’d be wrong 😉 Remember how a friend of mine was talking about my “cringey posts?” Part of the reason that conversation hurt is because I’ve thought it myself so many times. Whether it’s while I’m editing a novel, writing a blog post, or scrolling through my Instagram feed, I often hear those little voices asking what I think I’m doing. This makes it harder to write blog posts, but I’ve promised myself that it will never stop me. Even if it takes years for my blog to become popular and for me to have the self-confidence to write a post with ease, I’ve decided I’m in it for the long run, because no one’s ever succeeded without first failing.

In pursuing the ideal lifestyle, book, body, we often raise our standards for ourselves to near perfection and forget this. In the end, failure isn’t an impediment to success; it’s a prerequisite.

“A long time ago I took an oath never to write anything inoffensive.”

-Sol Stein in Stein on Writing

While I’m still working up the courage to write like this, I get where he’s coming from. If something is completely and entirely inoffensive, then it’s probably not that impactful either.

And this same concept applies to trying.

“Criticism is something we can avoid easily by saying nothing, doing nothing, and being nothing.”
– Aristotle

The only way you can be criticized is if you dare to stand out, to do something potentially praiseworthy. You will receive criticism if you do anything, whether it’s a spectacular fail or a marvelous triumph, but in the end, the only way to earn that praise, to do something noteworthy, to impact others, is to first endure that criticism.

While this might seem ridiculous, it’s true, because in the end, someone trying and giving it their all will always outperform someone who doesn’t dare to try in the first place.

So my theory is that I simply need to work harder than the 99.98% who score lower. My first two practice tests, I got 1420. Decent scores, but there’s still a decent gap to cover. And then I took another practice test this last Saturday, ran out of time on the math portion, and I got a 1330. I wanted to quit studying and wallow in despair, but I knew my current scores don’t define my future ones. 1330 is just a stepping-stone on the way to 1600.

When you’re okay with failing over and over, success becomes inevitable. It’s not the outcome that matters but the effort.

What’s something you’ve been tempted to give up on because you stink at it?