To discover the importance of weddings, you only need to take a leisurely stroll through Pinterest, and you’ll soon happen upon images of teased hairstyles, glitzy rings, and chic wedding gowns. This obsession with weddings isn’t restricted to the Western World; no matter what the culture, weddings are often as lavishly expensive as they are momentous, and there are as many traditions as there are cultures. I’ve snatched a few of these traditions to add depth to my storyworld in my current manuscript, which is due to be published in a few years, and I’ve altered them to better suit the fantasy setting. I’m going to showcase each of these by first introducing the original tradition, then the altered tradition, and finally showing how I used the altered tradition through a story excerpt.

Hand fasting is an ancient tradition, dating before 7000 B.C.1 For this tradition, the couple clasped hands, and a ribbon was wound around their entwined fists. It symbolized that the couple was engaged and, if they found each other suitable, would be married in a year. In my story, I change this tradition to tying fingers with ribbons. Each partner shares five vows. After each vow, they fasten a ribbon to tie their finger against their partner’s.

“Place your hands against mine,” he whispered.

She pressed her palms to his and waited.

The man conducting the ceremony held out a bowl of silver and gold ribbons tied into loops.

The King removed his left hand from hers to pick out a gold loop. He dropped it over his right pinky, pressed to her pinky. “I vow to protect you from any who would dare wish you harm.” He tugged on the piece of ribbon protruding from the loop. The loop tightened around their pinkies, tying them together.

But who would protect her from him?

The “blackening of the bride,” which originated in Scotland, is a tradition I’d rather not participate in.2 Friends capture the bride the day before the ceremony, cover her in molasses, ash, flour, and even feathers, and parade her across the town. Molasses and ash might be great in Scotland, but in my fantasy world, I decided to use wedding biscuits, which are thrown at both the bride and groom—after all, I don’t see why the bride should be the only one getting messy.

“The nobility skip this is part of the wedding ceremony.” He pointed to a table, laden with the biscuits. “Those wedding biscuits are thrown at the bride and groom to test the bonds of their marriage.”

She lifted her eyebrows. “So it’s like a food fight?”

He nodded. “Why don’t you try throwing a few at them? You want to ensure the bonds of their marriage are strong, don’t you?”

“Don’t we need to return to the palace?”

“Perhaps in a moment, but not yet.”

“Well, maybe just a few.” She darted to the table and grabbed as many as she could. She popped one in her mouth. The powdered sugar coating melted before the crisp biscuit gave way to tangy cream.

For our next wedding tradition, stealing is not only legal but encouraged. Once the groom removes his shoes, as part of the custom, the female relatives of the bride steal them, hide them, and demand money before they’ll return the shoes.3 The groom’s family tries to search for the shoes as the ceremony proceeds. In Torva, fairies have a similar custom, but instead of shoes, they both have a necklace of golden flowers.

Elm and Clover raised their joined hands. Some cheered and bobbed in the air. Some zipped to where Elm and Clover had abandoned their golden necklaces before snatching them. A few fairies tugged on the other ends of the necklaces, until a game of tug-of-war ensued. Was that allowed?

And then Elm and Clover shared a kiss. One of his hands cupped her cheek ever so lightly, as if he feared he’d break her. They parted, their eyes twinkling as if they contained a sea of stars.

With a little creativity, hand fasting becomes finger binding, smothering the bride in molasses becomes a food fight, and holding shoes for ransom becomes stealing flower necklaces. This is why I love fantasy writing; you can pour a myriad of cultures into a single story to create a world rich with variety, and there’s no better way to display this variety than through an elaborate wedding ceremony. 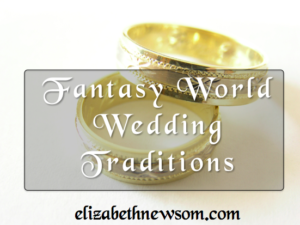