In a few weeks, I’m going to move for the 12th time. It’ll be my family’s 7th major move (excluding house changes or moves to somewhere in the same area). 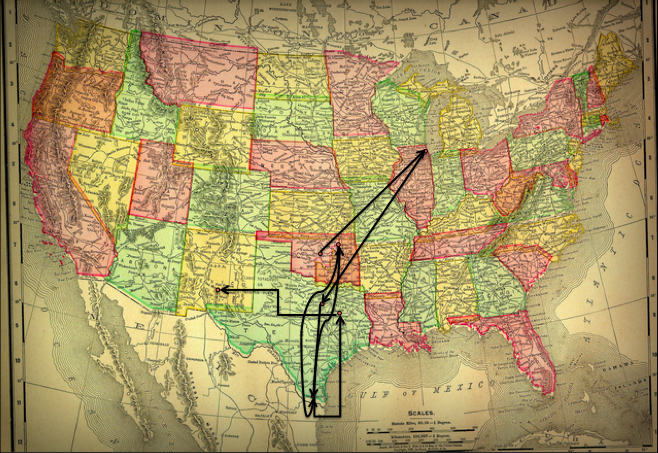 By this time, we’ve got the moving process down pat, from staging the house, DIY repairs, and painting walls to making file boxes. (Hint: If you want to move most of your things without hiring movers, use files boxes, since they’re small and portable. Even if they’re filled with books, they’re not overly heavy.)

I remember snippets of each place I’ve moved: the tiny apartments in Chicago, my private school where I wore uniforms and learned cursive in kindergarten near Dallas, the humidity, occasional green parrots, and top-notch public facilities (generously funded by the booming population and drug trade) in South Texas, the thin snow, large, sloping hills, tornado siren tests, and roof-tapping hail in Oklahoma, and the southern accents, hospitality, and greenery of East Texas.

In some ways, I’m kind of sick of moving. Whenever I move somewhere else, I’m reminded of what I don’t have. I’d love to live in an area I know like the back of my hand, where I know the streets and short cuts, the best hangout places, where I have my favorite restaurants and stores.

But even more than that, I’ve often wished I’d had childhood friends, friends who have known and loved me through all the stages of my life. When I move, others around me have known each other for years, which makes it that much harder to break into social circles. It’s not that people are mean; they’re just comfortable. Why try to spend extra effort making friends with the new girl when they already have friends they like? That’s the hardest part of moving. Leaving people behind is tough, but it’s made all the more difficult by the initial social isolation. When I first move somewhere, I feel invisible to those around me at times. And that hurts.

But I don’t regret moving so many times; I can’t. Moving has made me into who I am. The primary reason that I’m good at making first impression, that I’m likable and outgoing, that I ask good questions that lead into great conversations, is because of all the times I’ve moved. Even when I worked at McDonald’s, for interactions that lasted mere seconds, my friend-making abilities served me well and helped build my reputation. Moving has forced me to become someone I wouldn’t be otherwise.

I’ll miss everyone I’m leaving behind, but I’m looking forward in some ways to the move. Each time I move, it’s like I hit the restart button. No one knows anything about my reputation or past. They don’t have to struggle to forget my failings or flaws that I’ve grown out of. And moving is a perfect time to change anything I want to, from my sense of style to my personality. For my last move, I decided I was going to be outgoing and likable. For this move, I really want to work on my empathy, bringing out the best in others, and unveiling their potential.

Finally, this is the most important lesson moving has taught me: I grow wherever I’m planted, no matter how many times I’ve been uprooted. If God’s placed me somewhere, I know it’s for a reason, and I intend to make the most of it.

What’s been a major milestone in life that has changed you?