Being a True Optimist

If you’ll recall, a few weeks ago I went to Speech and Debate Nationals. I poured everything I had into my Silence of God Speech. When I passed quarterfinals, my friends asked if I were surprised, and I said no. I knew I’d at least get past quarterfinals, and I wouldn’t have been surprised if I made it to semifinals. But I didn’t. I got 33rd out of about 142 competitors, one place away from semis.

Right after my quarterfinal speech, a friend said he was disappointed he hadn’t come in time to see it. I was so confident, I said he could see my speech when I performed it again for semifinals.

But my optimism obviously wasn’t enough. So now that I realize how provincial my idealistic mindset was, the logical thing to do would be to give up my optimistic outlook, right?

What People Think Optimism Is 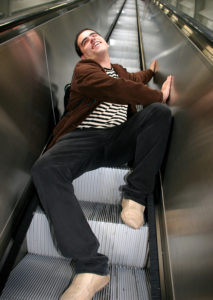 (For the sake of analogy, let’s pretend he’s falling down the escalator, shall we?)

This man is tumbling down the escalator, which will probably end in a concussion, yet he seems in no hurry to do the sane thing—to stand up and scramble off the escalator. Instead, he seems to be quite content and deliriously happy falling down. Perhaps he’s pretending or hoping his fairy godmother will whizz by and help him up.

And this image gives us a perfect idea of the misconceptions of optimism.

Just no. No, no, no, and no. With misconceptions like these, it’s no wonder some people think optimists are pitiable at best and insane-asylum-bound at worst.

So if none of these describe optimism, what does?

A quick search on Google says optimism is: hopefulness and confidence about the future or the successful outcome of something.

Expectation is important. After all, if you don’t expect that something can happen, it’s much less likely to happen. Why? Because if we don’t expect something, we often don’t even try. Once, I was hopping across a canal with a friend. Now, if you’ve ever been near canals, you know they’re icky and mucky. The jump was a bit wider than my leg span. At first, fear rooted me to the spot. The jump seemed a bit too wide for me, and a fall would send me tumbling into the water. Ew.
I took a deep breath, told myself just to think I could do it, and jumped. And I made it.
You might think this is a pitiful example, but the point is that believing I could do it made it more likely to happen. Or I wouldn’t have tried in the first place. And of course, we’ve all heard of the amazing effects of placebos—and their opposite, nocebos.

While expectation is part of optimism, it’s certainly not all, like some people seem to think.

For example, we’ve all heard of the water glass analogy to define pessimism and optimism. Optimism doesn’t mean expecting the water to turn into orange juice. Optimism is seeing that the glass is half full.

It’s not just expecting the best, but making the best of what already is. Even when my expectations fail, my outlook does not. I realized this aspect of optimism, thanks to a recent cold.

First of all, I don’t really get sick. In the past six years, this is probably the third time. An illness can sweep through my family, but I’m usually the one that manages to avoid it. Though it’s an exaggeration, I often tell people that I don’t get sick. When I got a cold, I was, of course, surprised. Apparently, my optimism wasn’t enough to keep all illnesses away. My temples ached, my throat hurt, and my nose was clogged. I didn’t feel great—at all—but I found myself thanking God for my cold. Which leads me to why optimism really matters:

Before I didn’t make semifinals, I was exuding confidence and speaking as if going all the way to finals was a certain thing. My friend asked what if I didn’t make it. What then?
I said it’d be okay, because if that happened, then something good would come of it. If it happened, God had a plan for it, meaning that whatever God had in store for me would be better than a 1st place trophy.

And I meant that.

True optimism isn’t expecting your plans will come to pass—it’s expecting God’s will.

I maintain a relationship with God and try to keep my plans and expectations as close to His as possible, but I’m human. Sometimes when I think 1st place is the best I could achieve, God knows 33rd place could offer me something even more valuable. I don’t know what’s best. God does. So why believe in my best when I could believe in God’s?

While I’d like to tell you guys that this attitude came naturally and easily to me after I didn’t make semifinals, it didn’t. I really had to fight for it. One time, when I was having devotions, I finally laid out to God everything in my heart:

I didn’t suppress my negative emotions. I expressed them.

I wasn’t complacent. I worked my tail off for that speech, and I gave the results to God.

I didn’t ignore reality. I acknowledged it.

I didn’t believe in magic. I believed in God.

And as far as emotions are concerned, optimism isn’t an emotion. It’s a choice. You don’t have to feel like an optimist to be one. I’ve been an optimist when I feel crushed, rejected, angry, in despair, and bitterly sad. And that’s okay, because no matter what I feel, I can still give it to God. I can still focus more on Him than I do my problem.

In the end, that’s all optimism is:

When have you guys had expectations that weren’t met?