Book Giveaway and Review: The Sentinel by Jamie Foley

You’ll like this if you like: Super Powers, Hidden Pasts, or a Blend of Fantasy and Dystopian.

“You’ll always revert to your lowest level of training in an emergency.

“Jet rose like a shadow at dusk and slipped into the council chambers.”

When a meteor storm knocks out the power grid, the supernaturally gifted become pawns in humanity’s struggle for survival.
The meteor storm wasn’t such a big deal until a comet landed in the middle of the road. Now Darien’s car is wrecked, his sister is bleeding out, and the only medical aid is at the reclusive Serran Academy.
Some say the Serrans have blood-bonds with angels. Some say they have surreal mental abilities. Some say the gods grant them elemental powers.
But when the Academy is targeted for harvesting, its secrets—and the collapse of modern civilization—are the least of Darien’s worries.

The story starts with a pretty interesting set up. I mean, not only is the world ending, but there are also super powers involved. These powers express themselves as different gifts. Sentinels can use their energy to hit things, like the force. Vanguards can make walls. Arbiters can control minds. And there are many more. Both the classifications of powers and setting immerse you in the storyworld.

To complicate matters, every character has a secret. Some know their secrets, some discover theirs. Each secret adds depth to the character and intrigue to the story as more of their past is revealed.

The characters are all so unique. Some are definitely gruffer than others, like Jet, but they all have something about them that makes them lovable. At the very beginning of the book, Jet attacks the main character, and throughout the entire book, he’s kind of a grump, but he’s also loyal and uses his deadly special op skills to protect those he loves. He’s definitely one of my favorite characters.

There’s a cliffhanger at the end of the book. It’s a bit random, which is probably my only complaint, but it works very well as a bridge to the next book. And quite frankly, I was too attached to the characters by the end of this book to care much 😉 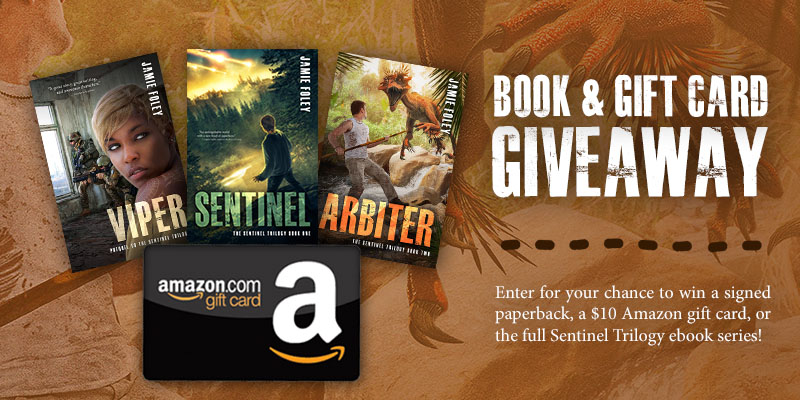 Guess what? Arbiter, the second book in the series was just released. In celebration of this, the author is hosting a giveaway!

10 winners will receive a Digital Book Bundle with ebook copies of each book in The Sentinel Trilogy (Viper, Sentinel, and Arbiter)

Winners will be randomly selected on 5/14/2017. Ebook formats available are Kindle .MOBI, .EPUB, and .PDF. Signing up for this giveaway subscribes you to Jamie Foley’s email newsletter. You can unsubscribe at any time. Good luck!

What makes you love a character? What attributes do you find particularly likable?

What Would You Do with a Million Dollars?