Cover Reveal for Captive and Crowned

First of all, all credit goes to Kiff Shaik for working so hard to get me these gorgeous designs. She’s absolutely amazing, and I adore the covers she designed.

Kiff incorporated the diadem into the cover design (the compass rose symbol you see on the circlet in the final cover), since I asked her to make an object the focal point of the cover rather than the character. I also asked that she go for a design with a bit of mystery. And I asked for roses in the background. 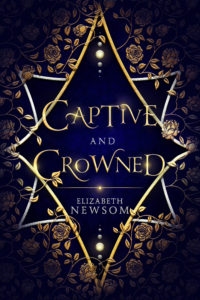 The last image, though gorgeous, wasn’t quite what I was looking for. I thought it looked too generic and it was hard to tell what the story was actually about based off of the cover. I asked her to insert the Queen’s circlet into the cover. Kiff also decides to add Evelyn’s necklace in this draft, which is significant to the story. 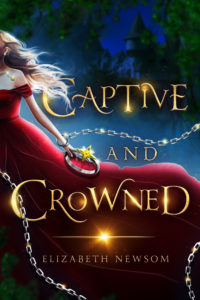 I ask her for yet another design, since I think the above looks too middle grade instead of YA (young adult). I ask her to make the focus of the cover Evelyn’s hand and the circlet. I ask for the ring of the circlet to be more delicate and realistic and that the chain around her wrist fit like a cuff rather than a bracelet. Kiff comes up with this gorgeous design, much closer to what I want for my final. 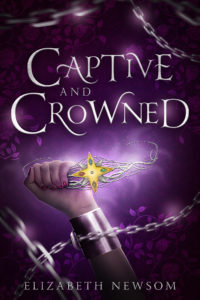 Though it’s gorgeous, I still ask Kiff for a few tweaks. I think the position of the hand doesn’t fit with the idea of Captive and Crowned. It looks like she’s thrusting the circlet into the air victoriously, which isn’t the mood I really want. I ask her to have the hand come from the top of the cover and to have the fingers loosely curled, maybe with the circlet dangling from her fingertips. I also ask her to make the appearance of the circlet and the hand look more realistic, like a photo. 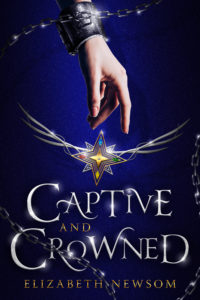 I decide the hand looks a bit too realistic (see what Kiff has to put up with?), and I ask her to soften the appearance a bit. I like the rustic chains better, but I missed the blurred appearance of the chains from the prior cover. But for the background, I miss the old one, with the purple and glowing spots and the roses. I like the compass rose, but I want the circlet to look more… circular. In short, I want the final draft to be a combination of this one and the one prior. 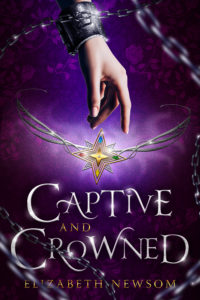 Kiff did these last three designs within two days, so she’s working like crazy! The last image was almost perfect, but I ask her to make the circlet smaller, since in proportion to the hand, I think it would be too big for Evelyn’s head. I also want all of Captive and Crowned to be in white. She comes up with the last and final draft… *drum roll* 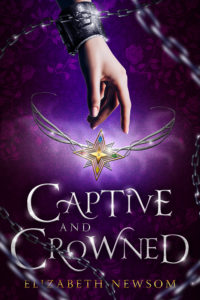 I couldn’t stop smiling when I saw it. <3 What do you think? Which of these cover images do you like?